A brief look back at the World Trade Center - Where were you?

14 years ago, the whole world stood still and watched as two relatively young (just under 30 years old) towering office buildings were destroyed. To this day, I think it's pretty safe to assume that every one of you can remember exactly where you were - and what you were doing when it happened.

First, let me tell you where I was...

I was living in Cleveland at the time - and ironically, I was packing for a flight to Chicago the following day (Wednesday) for a trade show.  My boss was to arrive in Chicago that Tuesday, and I later found out that he was actually IN THE AIR when the first plane struck.  Of course, all flights were cancelled for a number of days.  I ended up driving the 6 hours to Chicago.  The Trade Show was being held at the Merchandise Mart, and security at the building was tight.  The Twin Towers, The Pentagon, the foiled attempt at the White House, etc. - The Merchandise Mart was (is) an iconic building in Chicago.  When it opened in 1930, it was the largest building in the world, with 4 million square feet of floor space.  At that time, no one had any idea of how many attacks had been planned - nor how the terrorists chose the targets. Speculation at the time was that the Merchandise Mart may have have been one (in a very long list) of potential targets.  It was (needless to say) a very dismal trade show. But I'm getting off track here, sorry.

That day certainly changed the world.  Yesterday, I asked my [12-year-old] daughter what she knew about the [14-year-old] event.  She quickly rattled off a number of facts about 9/11 and then it hit me. They're teaching it in History classes now.  How's that for surreal?

Anyway, I've been meaning to put this together for a while now (for many years, in fact) - sort of a memorial or tribute. Not like one of those 2-hour TV specials (who has the time), but just something short, thought provoking, interesting and possibly different than everything else you might be seeing in your social newsfeed today. So here goes.


That's all I have for now - thanks for joining me.  I may come back and edit this post at a later date (although it might not be until next September).  Feel free to page-mark it, post it, tweet it, or whatever it is you do with random and interesting stuff (which for me, usually means just being able to know where I can go back and find it again at a later date if I want to). 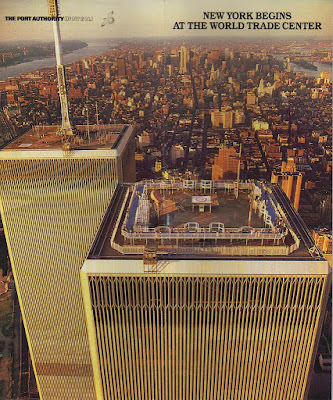