Who remembers this series of commercials, launched on January 10th, 1984 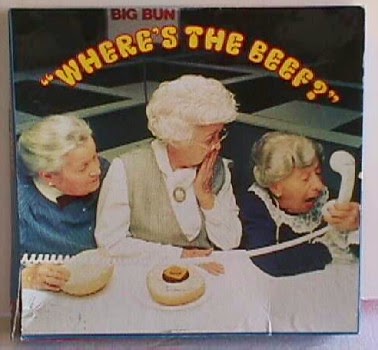 Additional commentary from Yahoo! below

Travel back with us to 1984, to a time when a simple question could spark a nationwide meat-craving frenzy.
Thirty years ago this week, Wendy's debuted their now-iconic "Where's the Beef?" commercial, starring Clara Peller as an old lady demanding more meat from her fast-food hamburger. And a classic '80s catchphrase was born.
The ad, originally titled "Fluffy Bun," was the brainchild of top-tier agency Dancer Fitzgerald Sample (also responsible for Toyota's "Oh, What a Feeling!" campaign), and featured three white-haired grannies examining a new burger — with a tiny patty and a huge bun — from an unnamed restaurant, the "Home of the Big Bun."
While the other two women admired the "big, fluffy bun," Peller wasn't satisfied, croaking the immortal query, "Where's the beef?" (Interestingly, Wendy's first tried a version with a bald man uttering the line, but it failed to catch on.) The catchphrase was a sharp jab at competitors Burger King and McDonald's, allowing Wendy's to trumpet the fact that their burgers had more beef than the Whopper or Big Mac.
Hitting the airwaves on Jan. 10, 1984, "Where's the Beef?" was an instant sensation, spawning a series of Peller-starring sequels along with a raft of merchandise, from T-shirts to bumper stickers to Frisbees to a board game. Peller even recorded a "Where's the Beef?" novelty single with Nashville disc jockey Coyote McCloud.
The ad was credited with boosting Wendy's annual revenue by a whopping 31 percent, and made its way into the 1984 presidential campaign: Walter Mondale invoked "Where's the Beef?" to slam rival Gary Hart's lack of substance during the Democratic primary. Mondale went on to lose in a landslide to incumbent Ronald Reagan; the ad's director Joe Sedelmaier said at the time, "If Walter Mondale could have said the line like Clara, he would have been our president."
Even better than the story behind the ad is that of its unlikely star, Clara Peller. A Chicago native, the 4-foot-10-inch Peller worked as a manicurist for 35 years before being "discovered" in a local commercial at the age of 80.
She was 81 when the Wendy's ad debuted and thoroughly enjoyed her overnight celebrity: She appeared on numerous TV talk shows, made a cameo on "Saturday Night Live," and even served as a guest time-keeper for the battle royale at Wrestlemania 2.
Sadly, the relationship between Peller and Wendy's soured when Peller repeated her famous catchphrase in a 1985 ad for Prego spaghetti sauce (and then declared "I found it!"), leading Wendy's to terminate her contract for violating a non-compete clause. Peller responded, "I've made them millions, and they don't appreciate me." (Peller was only paid scale for the initial commercial, but earned tens of thousands more from subsequent Wendy's ads and merchandise royalties.)
Peller passed away in 1987 at the age of 85, and Wendy's struggled until launching a new ad campaign starring founder Dave Thomas in 1989. The chain actually resurrected the "Where's the Beef?" tagline in 2011 to promote their new Hot 'N Juicy Cheeseburgers, answering the question with a definitive "Here's the beef."
And three decades later, "Where's the Beef?" lives on as one of the most memorable TV commercials of all time. Ad Age named it one of the top 10 ad slogans of the 20th century, and it helped build Wendy's from an upstart fast-food joint into the third-largest burger chain in the world. Not bad for three little words from an 81-year-old manicurist.